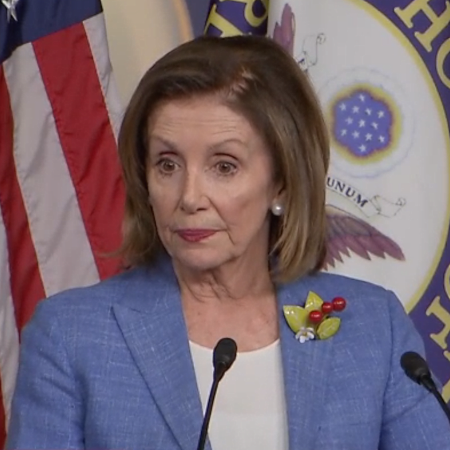 Numerous websites are spreading a false story claiming that House Speaker Nancy Pelosi “promises to resign” if President Donald Trump is reelected. The story originated on a website that calls its content satire, but has since been shared as if it were true.

House Speaker Nancy Pelosi has remained a prominent focus for stories published by America’s Last Line of Defense, the network of websites that calls its work “satire” but whose content often deceives social media users — or is republished elsewhere and presented as fact.

Fictitious headlines about Pelosi created by America’s Last Line of Defense have claimed, for example, that Pelosi used Social Security money to pay for the House impeachment inquiry of President Donald Trump. Another claimed Pelosi vowed to resign if that impeachment effort failed. Neither was true.

Together, the story on those various websites accrued more than 31,000 Facebook engagements, according to CrowdTangle data. The links were shared in many pro-Trump Facebook groups, where commenters often welcomed the erroneous information.

For those who clicked through and read the original version of the story, published April 10 on bustatroll.org, there are multiple indicators that the story is a fabrication. There’s a “satire rated” mark in the header image on the website, and a tag beneath the headline reads: “Pelosi Satire with Chile Sauce and Liquid Cheese.”

But none of the websites that republished the story uses clear disclaimers to indicate the story is completely bogus.

One version re-uses an image of Pelosi from the original website that has a hardly visible watermark on Pelosi’s jacket collar that signifies “satire rated.” Another version appears to edit that out.

And the text of the made-up tale otherwise largely reads like a news report on a supposed announcement in which Pelosi said she would “resign” if the president is reelected because Trump would be “there to block my agenda” — even though the announcement never happened.

It goes on to quote a “Senator Soundbite himself, Joe Barron” who “was delighted to hear the news of Pelosi’s resignation.” That may be intended as a nod to the “John Barron” alter ego Trump reportedly used when acting as his own spokesman in New York City early in his career. There is no senator by that name.

Editor’s note: FactCheck.org is one of several organizations working with Facebook to debunk misinformation shared on social media. Our previous stories can be found here.

Fisher, Marc and Will Hobson. “Donald Trump masqueraded as publicist to brag about himself.” Washington Post. 13 May 2016.

“Pelosi Promises to Resign if Trump is Re-Elected.” BustaTroll.org. 10 Apr 2020.

The post Pelosi Hasn’t Promised to Resign if Trump is Reelected appeared first on FactCheck.org.

Numerous websites are spreading a false story claiming that House Speaker Nancy Pelosi “promises to resign” if President Donald Trump is reelected. The story originated on a website that calls its content satire, but has since been shared as if it were true.
The post Pelosi Hasn’t Promised to Resign if Trump is Reelected appeared first on FactCheck.org.Read More

A look at past disappearances of North Korean leaders, officials

Live updates: Officials warn that protests could lead to another wave of coronavirus infections – The Washington Post

We noticed you're blocking ads!Keep supporting great journalism by turning off your ad blocker. Or purchase a subscription for unlimited access to real news you…

What Actually Happens When You Go on a Ventilator for COVID-19?

Dr. Charles L. Venable, The Melvin & Bren Simon Director and CEO of Newfields announced that Jonathan Berger has been promoted to Deputy Director of Marketing…