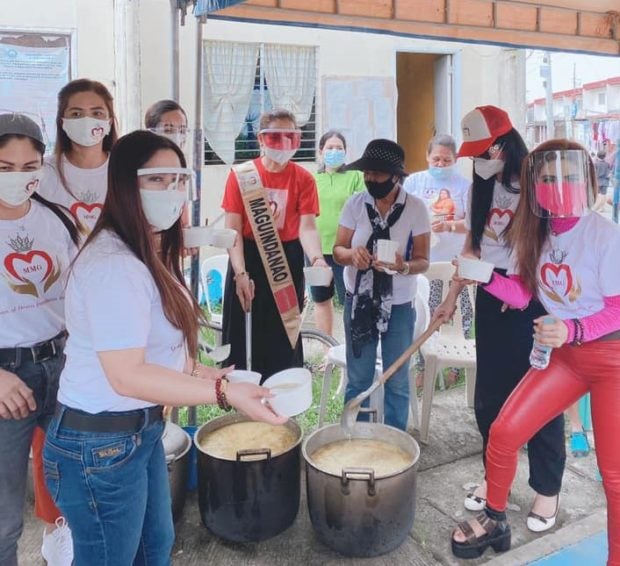 MANILA, Philippines–The Queen of Hearts Foundation Inc. continued its quest of providing relief to the less-privileged sectors of society through its “Palugaw Charity Mission” in the province of Cavite, south of Manila, on Sept. 26.

The feeding program was in partnership with Atorni Ton, host of “Showbiz Spotted” on dzRH, and was conducted at Sunshine Ville in Barangay Cabuco, Trece Martires, Cavite.

The foundation also distributed goods to more than 120 children from the community.

“We were truly delighted, it was fulfilling,” Go-Gil told the Inquirer in an online interview. “But it was also sad for us because we could not stay longer,” she added.

Since the COVID-19 pandemic hit the country, prompting the government to impose quarantine measures in March, the foundation has embarked on numerous projects to alleviate the conditions of some of those affected by the health crisis in several parts of the country.

The quarantine also pushed the 2020 Mrs. Queen of Hearts Philippines pageant aside, with its coronation ceremonies tentatively scheduled in October, or until the government eases restrictions on live events. It was originally scheduled in April.

Good News, Bad News, Real News for Vegas The Fourth Period Over the past decade, every Cup winner had an elite player in the middle (Anze Kopitar, Jonathan Toews,…

Where do Connecticut legislature candidates stand on environmental issues? – theday.com

19 dead as West Coast wildfires rage and cause world's worst air quality WTVD-TV An estimated 500,000 Oregon residents are facing evacuation because of the wildfires…